There is a whole website dedicated to photos of failed attempts at things you saw on Pinterest.

I had one of those moments tonight.

I wanted to make something simple and small for the Hayden and Abby's Valentine's Day parties at school.

I saw these cute marshmallow pops on Pinterest and figured that would be great!  Hayden LOVES marshmallows! 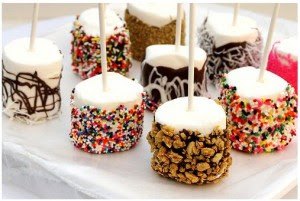 Yeah, mine didnt' turn out like that at ALL!  I didn't even bother taking a picture of the fail, because basically, it was just a big blob of goo!

I blame in on the fact that the idea orginated in the US and I just couldn't get the same products here in Canada!  But truthfully, it's because I didn't read how to do it, figured my big ol' brain knew what to do!

NOPE!  All I was left with was about 20 marshmallows with sticks in the middle, leaning to one side as the sprinkles slid off!  I acutally only tried about 3 of them, the rest of the marshmallows had the sticks ripped out of them and tossed back in the bag.  The sticks all went in the garbage!

So, now I had to go onto to attempt number 2, with the treats I had planned for Abby's class.

I wanted to make my own version of this:

They are dipped Oreos with sprinkles.  But Abby can't eat Oreo's, they make her sick and nobody wants that!  So, I got myself some chocolate covered graham wafer cookies.  I melted some white chocolate and at the last minute decided to add some pink colour.   I dug out my pink colouring paste and it had hardened up and gone gritty.  Despite my instints to NOT use it, I did.  It didnt' give me the colour I wanted.  I ended up with a bleh colour of reddish/pink, imagine diluted cream of tomato soup.  No turning back now, it was the last of the chocolate wafers.

I dipped in half of the cookie and laid it on the parchment paper and sprinkled with red and pink coloured sugar.  Problem was, the warm melted chocolate started to take off the choclolate coating on the cookies.  I quickly got them done and put them outside to harden up.  They turned out OK, and I had to now split them between Hayden and Abby.

I should have just gone with what I did last year.  Wanna a reminder of how awesome the treats were last year?