A Threat In My Own Yard!

Last weekend, we finally got rid of the major threat that had been lurking in my veggie garden for about a month now.

I wasn't sure how to deal with it for quite some time.  I tried to ignore it, but it would pop up occasionally and bring it to the forefront of my mind.

It was starting to impact every trip I made outside.  I hated having to go to pick tomatoes or carrots.  I just gave up and started sending Brian.

But last weekend was crunch time. The tomatoes needed another major pruning and staking.  I hadn't been in the garden more than 5 minutes when this major threat surfaced again!  I screamed real loud and pretty much pole vaulted out of the garden.  Brian ran to my aid, as well as the kids.

I did what any good mom would do when her children are facing a dangerous situation...I sent Hayden right in to deal with it for me!

What was the M.A.J.O.R threat you ask?

It would be the understatement of the year if I said I didn't like frogs!

I can't even express how much I dislike them!  Oh, I don't mind them if I know they are there and can avoid them.  I can watch them from a safe difference, I mean I did take these pictures.....it's the jumping out and scaring the living daylights out of me that makes me despise them so much.  This little sucker has jumped out at me a few too many times over the last month.  My reaction is the same each time....scream like a little school girl and jump like I just stepped in a bear trap!

True story...I once walked through a field with so many frogs...me gasping each time one hopped...that my abs were so sore the next day, I could barely stand!  I honestly had to stay home from school because I was so sore! ( not that I ever needed much convincing to NOT go to school, eh mom?)

Now, back to the frog in question.  I do my best to not let my fear of things effect the kids.  Hayden was all over that thing.....wanted to catch it so bad I was pretty sure he was going to turn my tomatoes into sauce while they were still on the vine.  We captured him in a HUGE home depot pail....'cause I needed to make sure he couldn't get away!

Hayden fondled that little fellow so many times, I was pretty sure he was going was to wish he had had a run in with the lawnmower instead!

I snapped a couple more pictures before the kids went to release him in the field WAY WAY WAY across the road from the house! 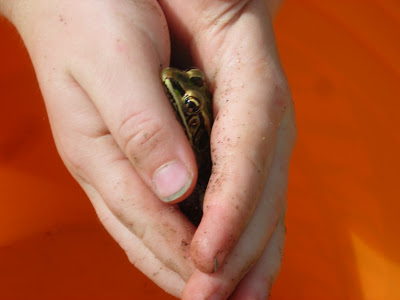 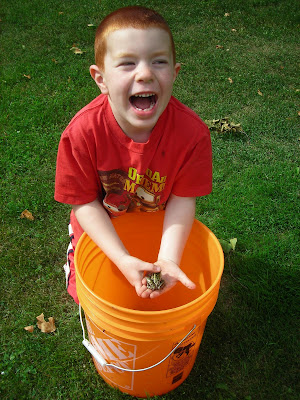