That Which Creeps Me Out!

So, in my last post, I let you in on a little secret….my fear of frogs.

I wish my list stopped there, but it doesn’t.

This post is inspired by something Abby said to me Monday morning, and I will fill you on those details in a bit, but first, I thought I would summarize a list of other non-important/real things that scare me and what I have self-diagnosed as the root of it.

This last one is what I will end my list with.  My list could go on for many more pages of stupid little things, but this one brings me back to my point earlier with Abby.

As I got past the age of playing with them and being their “mommy”…around the same time I watched “Child’s Play” and “Dolls” I realized there are some creepy-ass dolls out there...a number of them in being in my closet!

Suddenly, I began to imagine that their eyes followed me or if I didn’t treat them with the utmost care, they would attack while I slept!  I remember buying at a yard sale, this wind up clown that sat on a shelf and played “send in the clowns”…his head moved back and forth to the music.  I had him on the shelf in my room until I was convinced that he kept looking at me.  He got moved to mom and dad’s room shortly after that to haunt them instead.

My last doll haunting was early spring of this year.  I walked out the back porch and sitting in Abby’s baby swing in the backyard was a doll!  I didn’t really recognize it and it was dirty and ugly.  The swing sort of moved back and forth in the breeze and I had no idea how it got there.  Strange and creepy!  I didn’t go near it by the way!

I later learned that the neighbour snuck it there.  They found it in their yard and assumed that their dog took one of Abby’s dolls and tried to bury it…but to this over active imagination, this doll just hiked itself up into the swing to keep an ever creepy eye on me.  In all fairness, my lovely neighbour had no idea of my “phobia” of dolls that come to life!

Anyhoo, back to the link to Abby!

When we cleaned out my grandfather’s house, there was a brand new music box type toy.   A little statue of a clown that you wind up and it spins in a circle.  It has been on her shelf for months now, but I went in to wake her up Monday morning and she says to me while pointing in it’s direction.

“ don’t like what, Abby?” (already guessing what she was pointing to)

“that man…he scare me…please move it!” 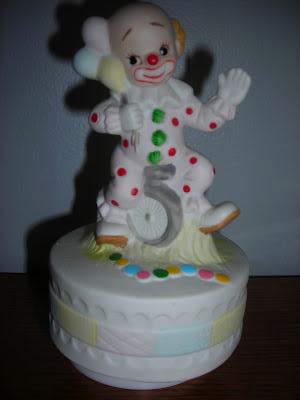 I didn’t push the issue, just said sure thing and put him in the living room.  I mean, this momma can understand the fear of the clown that moves!  Funny thing is though…I have NEVER pointed him out to her, NEVER wound it up…nothing, just took it out of the box and set it on the shelf!.

Don’t fear though…she is still a baby-aholic.  That girl loves her baby dolls, I just won’t tell her they can come to life and kill you if you are not nice to them!