When I met my husband....I knew he was the sporty type.  Played baseball and hockey.

I am NOT a sporty type!  I mean, I made sure I got my 1 mandatory high school gym credit out of the way in grade 9 so I could forget all about it.

So, I knew going into our relationship that any kids we had would be involved in sports.

Once Hayden was born and started to get a bit older, I made it VERY clear that I am not a "sport's mom"  Don't expect me to go and sit in the stands every week.

For the past 2 springs, Hayden has played soccer.  I could count on one hand the number of times I went over the course of both years.

Hockey is Brian's THANG!!!!  He played competitively with the Sudbury Wolves growing up and I know it's his dream to have his kids play.  He was so excited to get Hayden all signed up.

I was very excited too!  The plan was, he would take Hayden and Abby each week while I stayed home. For me this meant....TIME ALONE AT HOME!

The week before Hayden was to start, Brian got a message saying they were looking for help coaching.  He originally vowed NOT to coach unless they needed someone.  (which is pointless to say, because they ALWAYS need someone!)  But, he agreed to coach!  Suddenly, my dreams of quiet time at home came crashing down around me.  With Brian coaching, it means Abby can't go now!

Anyway, with that dream dashed, I was still holding strong to the fact that I would NOT be taking Hayden to his hockey...EVER!

And so this is where that parenting promise rebate comes into play.  This week, Brian is away for work.  Hayden is scheduled to be on the ice every Saturday and Monday.  This Saturday was the first week and he had to miss it due to illness.  I had told Brian earlier last week that I would not be taking Hayden on the Monday, because it would be too much for me to get home from work, watch Abby AND get him dressed to play.  I know, I know...you are probably saying "I'm a mom and I do that!"  Well Good For You!  And I mean that in a non-sarcastic way....it's just not in my realm of interest.

This is the point of the story where I blame my mother!  Your mother you say!?!?  YUP!  We were over there for a visit on Sunday and I was mentioning that I would not be taking Hayden so as to make my life easier.  She clearly stated that I HAD to!  Not fair for him to miss two practices in a row!  THAT only encouraged my darling husband and here I am, Monday night...giving you the details of hockey practice on this fine Monday evening.

It was just as I expected...perhaps worse!

It's hot and crowded in the dressing room.  I'm sweating like a pig in the midday sun, trying to wrangle a 5 year old into a jock and shin pads!  I get him dressed in good time, put the mouth guard in and start to gather up the stuff we took off into our bag for afterwards.  This is one of the turning points.  Hayden PUKES!  All over.  I do what all mom's do...put out my hands to catch it!  The mouth guard made him gag and throw up, and he didn't know enough to spit it out of his mouth.  So now, I have a dressing room FULL of people watching me.  I have to get the coach to go into the bathroom between the dressing rooms to make sure the door to the other dressing room (full of teenage boys) is closed so I don't have to embarrass them, because I am SURE they would be more embarrassed being caught with their willies hanging out than I would be to see it (I have a 5 year old boy...remember!)

I get him cleaned up and most everyone else is heading out to the ice.  Don't be surprised to learn that at this point....I really did try to convince Hayden to go home.

He spent the next 30 minutes rolling around on the ice.  At the 30 minute mark, he was ready to go home...but be damned if after all that I was letting him leave 30 minutes early.  So I gave him a drink of water and told him to get back out there, because if we left now, we were N-E-V-E-R coming back!

I did manage to snag some pictures so Dad could see how everything went and how his little tike looked out on the ice.! 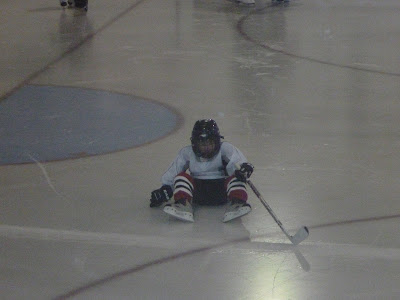 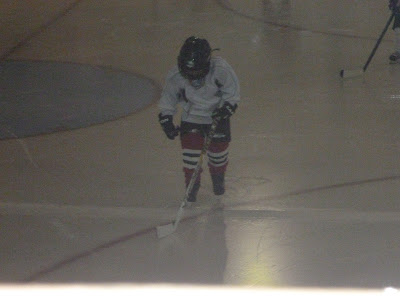 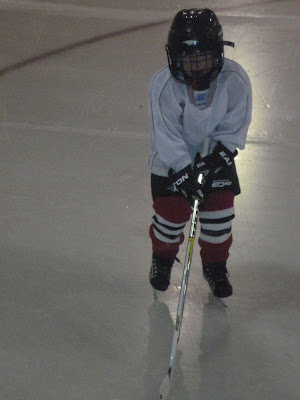 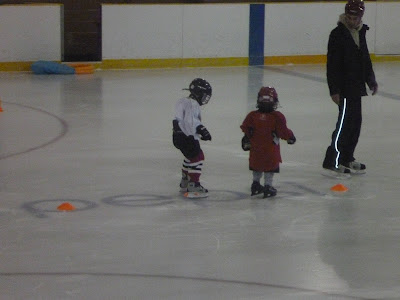 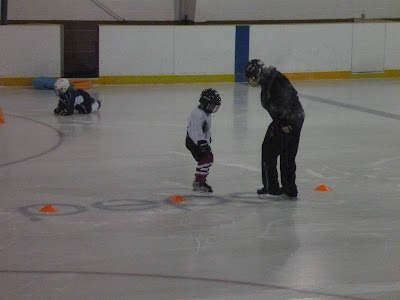 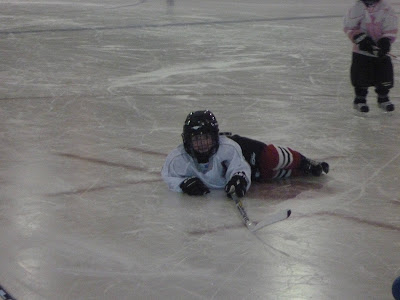 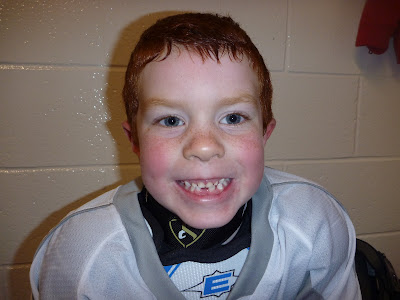 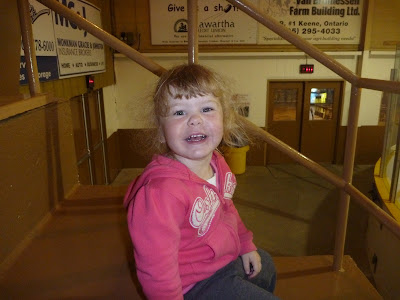 In the end, Hayden had fun and that is what counts!  I laughed to myself when I heard him talking to Brian on the phone, recounting tales of how he did so well and skated the whole time! (which is false btw, he spent more time rolling around on the ice like a sick puppy!

But I have also vowed...next time, I am hiring a teenage boy (think the neighbour boy next door ) to take him and deal with the crap of getting a little one ready to get out on the ice!