A Weekend In The Garden

Well, now that some nice weather is here, it was time to dig a new garden at home.

During the wind storm a couple weeks ago, we lost the 2 old spruce trees at the side of the house and without them, the house looked bare and not as private.

Eureka!  Let's put in a garden.  I think my husband secretly loathes me....I have the vision...he is forced to execute said vision AND deal with plenty of last minute revisions.  But, as super as he is...he doesn't grumble!

It started by making him trek through mosquito infested cedar trees for some old rail fence.  Then he had to unload them all and move them around the yard.

We had to wait until the kids went to bed to install the fence and he put up with a my one-sided conversation that went much like this:

" I want them to go there"
" Well, actually, perhaps they look better this way"
" No, put them back the way we had them first"
" Don't you think you should use a level?"
" Where is your measuring tape?"
" Is everything the same height?"
" How does that look to you?"

I tried to help move the rails and I think I only hit him in the head a couple times as I was swinging around this 8' rail.  But again, he was good at coping and just side-stepped my fumbling.

In the end, it all went up and I had to then decide the shape of the garden so he could remove all the grass.  I won't share the details of THAT one sided conversation, because it was pretty much the same.

It took us about 2 hours to dig up all the grass and then dispose of it.

I am hoping this weekend to go and get some plants for it.

Enjoy a couple pictures from the weekend! 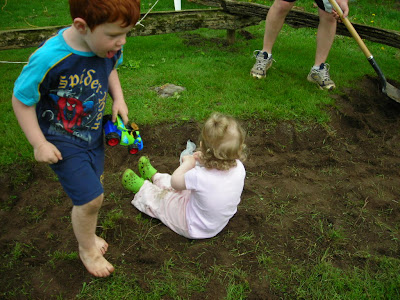 Mom, Dad, Abby and I went to a few yard sales Saturday morning.  We got lots of good junk....here is a  picture of one of them and how I "dressed" it up.  Stay tuned for my other find, once I get it decked out

For Mother's day, Hayden brought home a pansy in cup for me.  It was so sweet and had a couple blooms on it. I was waiting to plant it once the gardens were ready.   However, the cat must have decided that it had been there enough and within the last week, knocked it over at least 3 times, and finally I had to cut the blooms off because they were broken.  I handed it to Hayden and told him to pick a spot and daddy would help him plant it.  He insisted he could do it himself and this is what I got:


Afterwards, all he could talk about was how when this plant was ready, he was going to pick the carrots for Carrot Cake, despite how many times I told him it wasn't a carrot plant, but a pansy!
Posted by Unknown