Worthy Of A Photo Shoot

Last week at Hayden's school, they were having a cupcake sale as a fundraiser.  I WAS PUMPED!!! I love doing this sort of stuff and now that Hayden is in school, I look forward to all the class parties and bake sales that will come my way.
You know those commercials where the parent finds the flyer in the child's backpack that says they must bring 5 dozen cupcakes by tomorrow and the parent freaks out?!?  I would be in my GLORY!! Get out of my way, I'm heading for the kitchen!

So, I made some awesome cupcakes last year for Hayden's nursery school.  The woman in charge of the daycare called me about 10 minutes after I dropped them off to see if I bought them or made them.  I was so pleased to hear that.  And I think I know why, my mom ALWAYS made stuff for parties at school and I was always so proud to take my treats. (well, except for the year dad put the cupcakes into the car upside down and he had to send me with chips)  These are memories that will stick with me a lifetime and I want my children to have the same experience.

Anyway, back to my story...so, how can I make my cupcakes even more awesome?  Suddenly, I remembered having seen somewhere that they can be made in ice cream cones.  Yup, I was going to try that!  I bought all the stuff and prepared to make a sample batch. I didn't want to screw them up for the sale.

Hayden really liked them and thought they were tasty, however, I didn't love them.  I had to think on it.

Then, I ran into the woman who runs the day care and she said to me, "are you making your awesome cupcakes for the sale?"  Yup, I said,   With a smile she replied " I thought so, I want to see them when you bring them in"   My mind was settled, I would make my "standard" cupcakes. I think they turned out pretty great, what do you think? 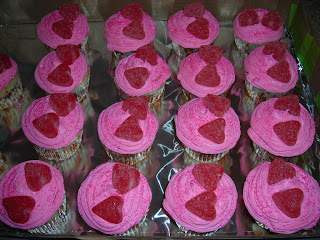 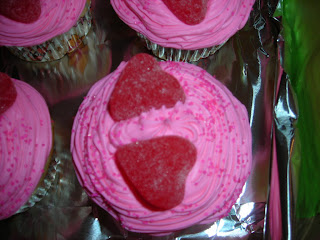 I will let you in on a secret...use a piping bag to ice them.  If you have never used a piping bag for cupcakes, put away the butter knife you use to slather on the icing.  Go to the store and get a # 22 star tip.  You also need the coupler that holds the tip in.  Then, just put the icing in the piping bag ( I just use disposable ones), twist the top and evenly apply pressure as you circle around the cupcake from the outside towards the centre. Voila!

Hayden thought these ones were pretty tasty too of course.  According to him, he had one of mine at school from the sale and also picked one of mine to bring home.  Guess it's a compliment if out of all the cupcakes to choose from, your son picks yours.  Guess I can't go wrong in his eyes!
Posted by Unknown